The gear coupling is referred to as a modified version of the flange coupling, which can transmit high torque due to the larger size of the teeth. In these types of shaft coupling, the flanges as well as the hub are found to be assembled separately together instead of any single part as a flange coupling.

During its construction, each joint is found to have a 1:1 gear internal ratio along with an external gear pair. And gear coupling is found to be limited to angular misalignments of around 0.01-0.02 inch in parallel as well as in 2 degrees angular. Gear couplings, as well as universal joints, are the ones that are found to be used for similar applications. These are those couplings which are mostly used in heavy-duty applications where the torque transmission is found to be required to be the highest. Type GICL gear coupling is suitable for connecting two horizontal coaxial shaft series and having a certain compensatory performance for a relative offset of two axes.

If the distance between the two connected shaft ends is too long, you can adopt type GICLZ. The nominal torque is between 800-3200000 N.m. Operating ambient temperature is between-20-+80℃. 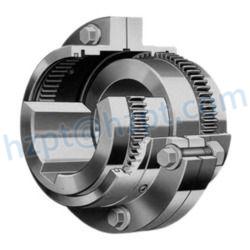 The gear couplings can be divided into three types according to the axial tooth shape of the outer gear sleeve, namely straight tooth coupling, drum gear coupling and special drum gear coupling. Regardless of the type, the internal ring gear and the involute spur internal gear are the same except for the selection of the top clearance coefficient of the gear teeth.

The axial tooth blank of the outer gear sleeve of the straight-toothed gear coupling can be processed into two types: straight line and arc shape, while the index circle and the dedendum circle are both straight lines. The meshing form of this coupling and gradual. The meshing of the internal and external teeth of the open-line cylindrical gear is exactly the same. The relative displacement between the two shafts is compensated by increasing the backlash of the internal and external teeth, but the amount of compensation is limited.